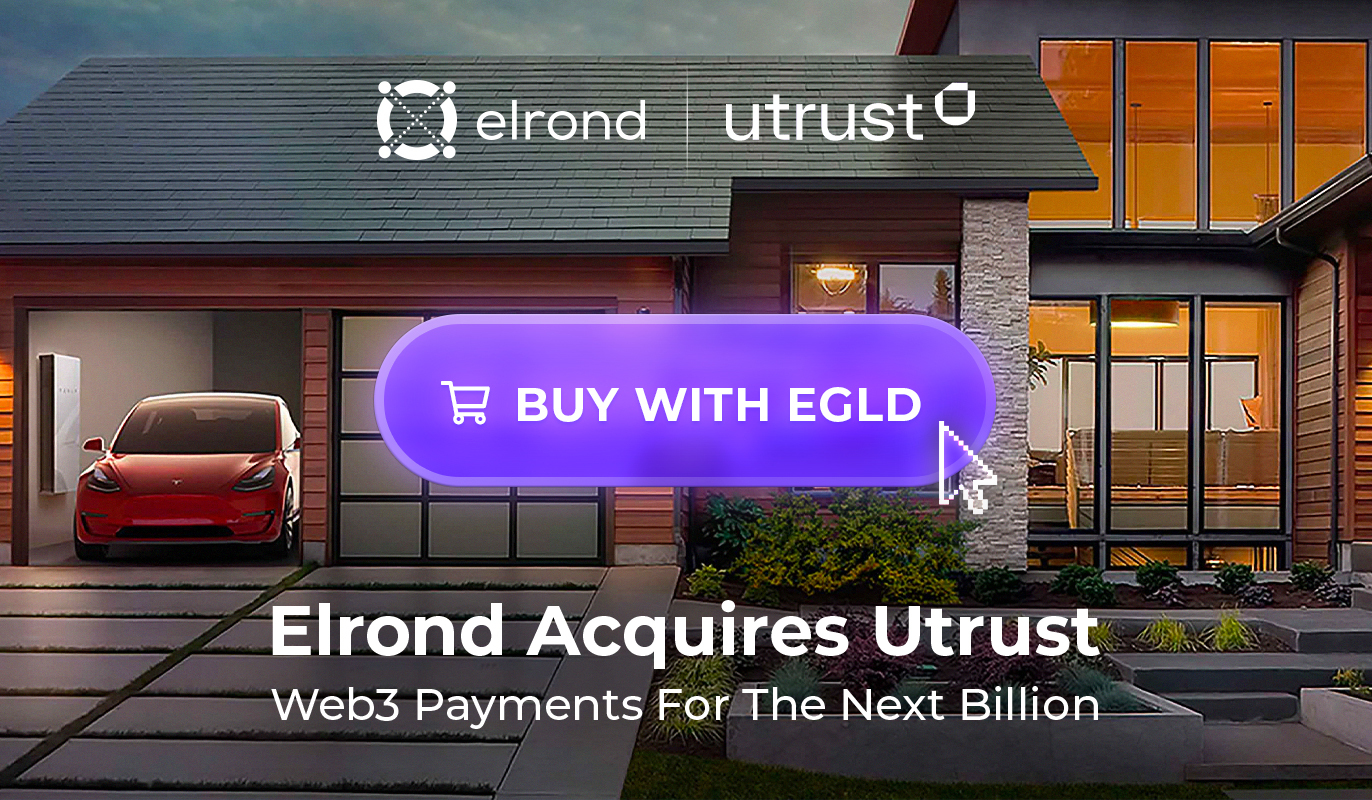 In the era of Web3, payments will be fast, inexpensive and secure. By bringing powerful DeFi mechanics into play, payment processing will no longer incur costs, but rather become income streams.

Initiate #web3payments revolution! We are thrilled to announce that Elrond has acquired the leading crypto payments service provider Utrust.

With the acquisition of Utrust, Elrond sets out to accomplish two goals:

Merchant Yield: transform payment processing services from a cost for merchants into an income stream.

Elrond has developed groundbreaking blockchain technology that is intended to serve as the backbone for a new, high bandwidth, low latency, inexpensive financial system that becomes accessible to anyone anywhere.

The goal is to first make payments fully natively digital by using blockchain to offer near-instant and secure global settlements at a trivial cost, accessible to merchants worldwide, and second, to bring powerful DeFi mechanics into play to create a paradigm shift via Merchant Yield products.

“At their best, payments should happen near-instantly, globally, and at a trivial cost. Enabling this for merchants worldwide is our primary goal. The second product we will be working on together with the newest member of the Elrond family is Merchant Yield, a Web3 payment processing solution that will provide yield for merchants, instead of requiring them to pay a percentage of the transacted value. The implications are hard to overstate.” said Beniamin Mincu, Elrond Network CEO.

For context, in a fully digital world payment processors still offer slow settlement times, and charge merchants anywhere between 3% – 11% of each transaction, an amount that is often the difference between profitability and bankruptcy for a lot of businesses worldwide.

By using state of the art blockchain technology to make payments fully and natively digital, we not only increase the settlement speeds and significantly decrease the costs associated with receiving a payment, but transforming them into a scalable revenue stream, enabling merchants anywhere to bring more of the multi-trillion dollar crypto market into their business and earn on every transaction they receive, instead of paying for it.

“The idea of payments turning from a cost into a revenue stream sounded as crazy to us as it does to anyone thinking about it for the first time. After exploring this together with Elrond, we not only realized that this is possible, but also that it is the inevitable future of payments. So we decided to join forces and accelerate the implementation of DeFi payments.” said Sanja Kon, Utrust CEO

Powered by the Elrond technology, Utrust enters a new growth chapter. One with significant ramifications for internet commerce and merchants worldwide.

Elrond is the internet-scale blockchain, designed from scratch to bring a 1000-fold cumulative improvement in throughput and execution speed. To achieve this, Elrond introduces two key innovations: a novel Adaptive State Sharding mechanism, and a Secure Proof of Stake (PoS) algorithm, enabling linear scalability with a fast, efficient, and secure consensus mechanism. Thus, Elrond can process upwards of 15,000 transactions per second (TPS), with 6-second latency, and negligible cost, attempting to become the backbone of a permissionless, borderless, globally accessible internet economy.

Web3 payments technology. The radically better way to pay and get paid globally.

Utrust is the leading cryptocurrency payment solution designed to modernize the financial and payments industry and solve the problems of traditional payment methods by enabling immediate transactions, buyer protection, and instant settlements for merchants.